Even though the main thrust of the ADK Futures project has moved on to implementation and tracking progress toward the vision, we continue to give talks where we introduce new groups to the original six scenarios and the issues that they frame for the Park.  There are plenty of people that have not heard them yet and there is always a good discussion.

Recently we gave a talk at the Adirondack Museum in Blue Mountain Lake.  About 40 attended and we had an excellent discussion about the scenarios.  In the middle of our talk, after we presented the endstates, we asked them to do the ranking exercise for desirability and attainability.  The results from 31 people turned out to line up very well with the overall results from the workshop series as you can see in the table below.  The ranking on desirability is almost identical to the workshop series.  The attainablity rankings were slightly different, putting the Usable Park (B) first instead of Sustainable Life (C).  Also, surprisingly, the Adirondack County (D) endstate was seen as more attainable than in the averages but thinking of the Park as a region is much more widely talked about now than it was. 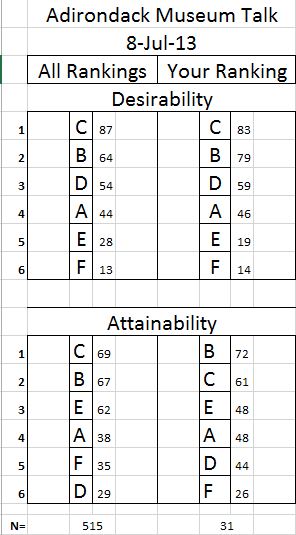 In addition, we published a condensed version of the six endstates in Adirondack Life this spring with a link to the magazine’s website where readers could do the ranking exercise. Although hundreds of people started the exercise, only 91 completed it.  These rankings are shown in the table below.  C and B are still the top in desirability.  But the Wild Park (A) ranks third instead of fourth with this group.  Also Adirondack State Forest (F) got a slightly higher score and is fifth instead of sixth.  The attainability ratings are very different with Sustainable Life (C) is only third.  Wild Park (A) again ranks higher than in the workshop series.

These results are similar to those of two half-day workshops we did during 2012.  One was with a group of seasonal residents.  The other was a group of Paul Smith students in a land use planning class.  The Wild Park scenario was an attempt to capture the point of view of a person who doesn’t live in the Park and is not involved in the issues of economy and community building in the region. 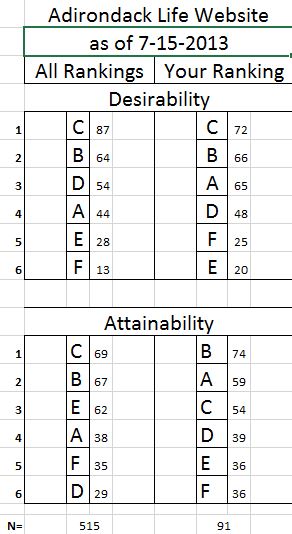 These two data sets overall continue to support the consensus vision that is based on the Sustainable Life (C), with a sustainable version of the Usable Park (B), and continued protection of the Forest Preserve as a Wild Park (A).

We are retired management consultants doing a pro bono project on the future of the Adirondack Park.